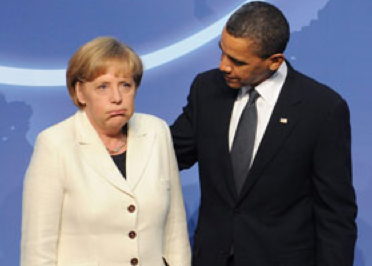 BRUSSELS – Could Germany, which accounts for 1% of the world’s population and less than 5% of its GDP, actually be responsible for the sorry state of the global economy? The US Treasury Department started the chorus with a report on currency manipulators that criticized Germany’s current-account surplus. The European Commission added its voice last month, when it published its scorecard on macroeconomic imbalances and called for an in-depth analysis of the German surplus.

CommentsView/Create comment on this paragraphThe emphasis on Germany seems much more justified within the context of Europe. But, even there, Germany represents less than 30% of eurozone GDP (and less than one-quarter of output in the EU as a whole). Germany is important but not dominant.

CommentsView/Create comment on this paragraphThis focus on Germany also overlooks the fact that the country represents just the tip of a Teutonic iceberg: All northern European countries with a Germanic language are running a current-account surplus. Indeed, the Netherlands, Switzerland, Sweden, and Norway are all running surpluses that are larger as a proportion of GDP than Germany’s.

CommentsView/Create comment on this paragraphThese small countries’ combined annual external surplus is more than $250 billion, slightly more than that of Germany alone. Moreover, their surpluses have been more persistent than those of Germany: ten years ago, Germany had a current-account deficit, while its linguistic kin were already running surpluses of a similar size as today. Over the last decade, this group of small countries has recorded a cumulative surplus larger than even that of China.

CommentsView/Create comment on this paragraphAre all of these countries guilty of mercantilist policies? Have all of them engaged in competitive wage restraint?

CommentsView/Create comment on this paragraphMuch of the facile policy advice provided to correct the German surplus seems misguided when one examines the persistent surpluses of this diverse group of countries. Some, like Germany, are in the eurozone (the Netherlands); others have pegged their currency to the euro unilaterally (Switzerland), while still others maintain a floating exchange rate (Sweden).

CommentsView/Create comment on this paragraphWithin the eurozone, the counterpart to the German surpluses used to be the deficits of the peripheral countries (mostly Spain, but also Portugal and Greece). This is no longer the case.

CommentsView/Create comment on this paragraphToday, the counterpart to Teutonic excess saving is “Anglo-Saxon” dissaving: most English-language countries are running current-account deficits (and have been doing so for some time). Together, the sum of the current-account deficits of the United States, the United Kingdom, and major Commonwealth countries amounts to more than $800 billion, or roughly 60% of the global total of all external deficits.

CommentsView/Create comment on this paragraphIt is not surprising that national policymakers (and media) in major Anglophone countries are complaining about the German surplus. But action by Germany alone will have little impact on these countries’ fortunes, because their deficits are much larger.

CommentsView/Create comment on this paragraphThe key question is who would benefit if Germany started to import more. The peripheral eurozone countries account for only about 10% of German imports, compared to almost 40% for the other surplus countries in northern Europe. Stronger domestic demand in Germany would thus benefit these other surplus countries (with low unemployment) four times more than the peripheral countries (with much higher unemployment). Other countries with a structural surplus, including Russia, China, and Japan, would also benefit more from stronger German demand than Spain or Greece would.

CommentsView/Create comment on this paragraphThis applies to both the European and global contexts. Coordination within the eurozone (for example, through the excessive-imbalance procedure, which might now be applied to Germany) seems largely insufficient if the aim is to help the peripheral countries. At the global level, the Anglophone deficit countries, too, would benefit much more if all of northern Europe increased its domestic demand.

CommentsView/Create comment on this paragraphGermany has been an attractive target for external-deficit countries in Europe and beyond. But beating up on Germany alone appears to be the wrong way to get results.