In a 2011 interview, hedge fund principle, Kyle Bass spoke of “when [he] asked a senior member of the administration last week, ‘how are we going to grow exports if we wont allow nominal wage deflation?'”

The response was: “We’re just going to kill the dollar.”

In a 2011 interview, hedge fund principle, Kyle Bass spoke of “when [he] asked a senior member of the administration last week, ‘how are we going to grow exports if we wont allow nominal wage deflation?'”

The response was: “We’re just going to kill the dollar.”

“After such a notable correction in the past 9 months, the precious metal once again becomes a very attractive global asset if monetary policy in the largest economy of the world spins out of control,” remarks Jones Trading.

Even if policy is not perceived as “out of control,” surely it snaps of the 100bp tightening Fed-Chairman Ben Strong pulled in early 1928, only to back-pedal afterward, admitting his error, and reversing course by September of that year. 2013 tightening will likely be offset by problems in Europe and China adding to the dollar in relative terms. Widely appreciated global economic collapse by winter, will usher in further printing in 2014.

Wheeling markets up, then down, then back to the G7 drawing boards for more crisis resolutions won’t bode well once again. While some say the dollar killing takes to long, most aren’t complaining in the streets about how little they have lost to rising prices, but they sure are worried about it.

Both in the EZ and the US, rising prices is the top economic concern–not jobs or a housing crisis.

Prices are subjectively formed, and citizen’s expectations for rising consumer prices (due to excessive printing and bad loans in the legacy western monetary system), was only inevitable. So far financial assets have inflated–but this distortion only lasts as long as the belief in Fed’s control over an exit and recovery–of which they have neither.

The next step in a general deflation is bank assets falling in price, while that capital is moved into assets with a more stable value for the duration of the depression. This is where hard asset prices benefit over financial–when the general opinion moves towards “they can’t and won’t ever permanently stop. It is another bluff.”

Bernanke went a long way towards aiding this realization with the extent to which he and his ilk reacted to the 1928-ish 100bp rise in rates they effected.

No less than six presidents and governors came out to reverse what was said at the last Committee meeting: HALF OF THE FED INDICATED IT LIKELY WOULD BE APPROPRIATE TO END ASSET PURCHASES LATE THIS YEAR

After that tour-de-talk, Bernanke came out today to talk about how purchases “could increase,” saying “if financial conditions were to tighten to the extent that they jeopardize the achievement of our inflation and employment objectives then we would have to push back against that.”

One chart that says quite a bit is the Euro versus the Fed’s dollar.

On the left we see the “virtuous circle” exit strategy taper-talk, convincing all of epic escape velocity into growth and, thus dollar strength (lower on chart). 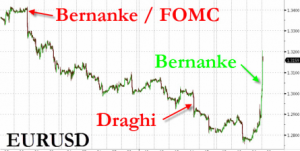 It seems their dollar was quicker to weaken than to strengthen.

Killing the dollar will be a relative game, in this way hidden to most participants.

It is again time to back up the truck, before gold and silver again move first, this time discounting: 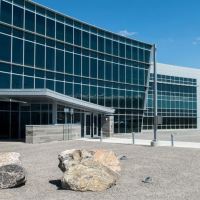