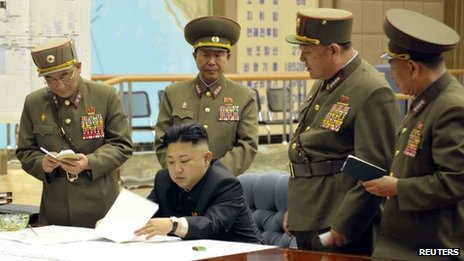 North Korea has said it is entering a “state of war” with South Korea in the latest escalation of rhetoric against its neighbour and the US.

A statement promised “stern physical actions” against “any provocative act”.

North Korea has threatened attacks almost daily since it was sanctioned for a third nuclear test in February.

However, few think the North would risk full-blown conflict. It has technically been at war with the South since 1953 as no peace treaty has been signed.

An armistice at the end of the Korean War was never turned into a full treaty.

The North carried out its third nuclear test on 12 February, which led to the imposition of fresh sanctions.

A North Korean statement released on Saturday said: “From this time on, the North-South relations will be entering the state of war and all issues raised between the North and the South will be handled accordingly.

“The long-standing situation of the Korean peninsula being neither at peace nor at war is finally over.”

In Washington, Caitlin Hayden, a spokeswoman for the National Security Council, said the US had “seen reports of a new and unconstructive statement from North Korea”.

“We take these threats seriously and remain in close contact with our South Korean allies,” she said.

North Korea has made multiple threats against both the US and South Korea in recent weeks, including warning of a “pre-emptive nuclear strike” on the US and the scrapping of the Korean War armistice.
On Thursday, North Korean state media reported leader Kim Jong-un “judged the time has come to settle accounts with the US imperialists”.

He was said to have condemned US B-2 bomber sorties over South Korea during military exercises as a “reckless phase” that represented an “ultimatum that they will ignite a nuclear war at any cost on the Korean peninsula”.

US mainland and bases in Hawaii, Guam and South Korea were all named as potential targets.

State media in the North showed thousands of soldiers and students at a mass rally in Pyongyang supporting Kim Jong-un’s announcement.

North Korea’s most advanced missiles are thought to be able to reach Alaska, but not the rest of the US mainland.

On Wednesday, Pyongyang cut a military hotline with the South – the last direct official link between the two nations.

A Red Cross hotline and another line used to communicate with the UN Command at Panmunjom have already been cut, although an inter-Korean air-traffic hotline still exists.

The jointly run Kaesong industrial park, just north of the border, is still in operation. However on Saturday, Pyongyang’s official KCNA news agency said it would be closed if insults to the North’s “dignity” continued.

China, North Korea’s biggest trading partner, has reiterated its call for all sides to ease tensions.

Foreign ministry spokesman Hong Lei told a daily news conference that “joint efforts” should be made to turn around a “tense situation”.

On Saturday, Russian foreign ministry spokesman Grigory Logvinov told the Interfax news agency: “We expect all sides to show maximum responsibility and restraint and that no-one will cross the line after which there will be no return.”

He said: “Naturally, we cannot remain indifferent when an escalation of tensions is taking place at our eastern frontiers. We cannot but worry.”

One South Korean resident, Lee Gae-hwa, told Reuters news agency she felt “very scared”, adding: “I hope we can find a good solution since we’re from the same nation.”

How you can help GeoIntel.Blog.4.Italian/SMEs ?
In these uncertain times, GIB4I/SMEs makes sense of a complicated world providing our nation’s policy makers with accurate information and smart policy recommendations. Through research, education, investigative journalism, legal initiatives, and targeted communications campaigns, GIB4I/SMEs fights a war of ideas and turns ideas into actions that lead to positive results. We identify effective policies and promote them energetically to the policy community, opinion leaders and the general public. The GIB4I/SMEs website at https://geointelblog4italianpmi.com/ publishes news articles, commentary, background research and analysis on a broad range of issues, focussing on social, economic, strategic and environmental processes. Since May 2012, we have established an extensive archive of news articles, in-depth reports and analysis on issues which are barely covered by the mainstream media.
In an era of media disinformation, our focus has essentially been to center on the “unspoken truth”. Emphasis has been placed on establishing a comprehensive archive of Global Research articles and audio-visual material.

Emphasis has been placed on establishing a comprehensive archive of Global Research articles and audio-visual material. The emphasis and focus has been placed on creating a complete archive of articles of global research and audio-visual materials serving small and medium-sized Italian companies to achieve the objective of making a " Italy National System " that since the time of the Roman Empire has always been in the throes of to anarchy and fratricidal wars for the benefit of the interests of foreign powers.